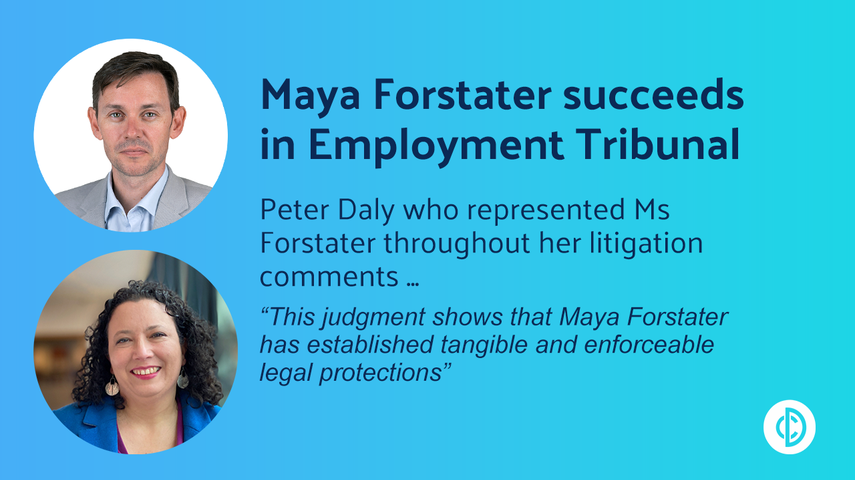 Gender critical beliefs are protected in the workplace

Judgment has been received in one of the most important Employment Tribunal claims of recent years: Doyle Clayton client Maya Forstater has succeeded in showing that she was discriminated against on the basis of her gender critical beliefs, a protected characteristic under the Equality Act 2010.  This judgment establishes that gender critical beliefs are protected in the workplace.

The case has commanded the attention of international media since 2019, when Ms Forstater launched her claim. This came after she had attempted to engage colleagues in a discussion about the importance of biological sex and the negative implications for women that arise from ignoring biological sex in favour of gender identity.

In December 2019, following coverage of an earlier judgment in the case – which has since been overturned - JK Rowling publicly commented on the case, which elevated it to international attention.

In June 2021, Ms Forstater successfully established a binding legal precedent that gender critical beliefs were in principle protected by the Equality Act.  Following that appeal, her case continued at the Employment Tribunal, to determine whether she was unlawfully discriminated against by her former employer on the basis of her protected belief.

The judgment promulgated today concludes that Maya Forstater was the subject of unlawful discrimination on the basis of her gender critical beliefs.

Gender critical beliefs – in summary that biological sex is real, immutable, binary and important – have been the subject of a great deal of comment and discussion in recent years.  The belief set is in opposition to aspects of gender identity theory, which holds that biological sex (if it exists at all) is secondary to gender identity, that sex and gender are in effect the same, and that people are the gender they say they are, regardless of biology.

The conflict between the two sets of beliefs is relevant in a number of contexts – including prisons, sport, data collection and single sex spaces – where the biological differences between the sexes mean that there is a specific necessity to differentiate between men and women, regardless of gender identity.  The conflict has manifested itself in a significant number of disputes, many of which are now the subject of litigation.

“This is an extremely important judgment.  Maya Forstater’s successful appeal last year demonstrated that gender critical beliefs were in principle protected by the Equality Act and the European Convention on Human Rights.  This judgment is the “proof of concept” of that principle, and shows that those legal protections are tangible and enforceable.  Gender critical people cannot be discriminated against on the basis of their beliefs, and the courts will protect them where unlawful discrimination occurs.

“Importantly – and contrary to much commentary and speculation – this judgment establishes that the legal protection goes further than protecting the mere holding of gender critical beliefs: acts of manifesting the belief through lawful speech and action are protected. The mistaken assertion made by some that gender critical people were protected so long as they never gave voice to their belief – in effect, compelling gender critical people to remain mute – was always mistaken and is now shown to be so.

“This is therefore a judgment with broad and biting real-world implications.  Employers and service providers need to understand these implications.

“Discussions around sex and gender attract strong and genuine contributions.  The contributions of gender critical people – overwhelmingly women – have been treated in many instances with real prejudice: their concerns mischaracterised and their livelihoods threatened.

“Maya Forstater’s legal victories – first in the EAT and now at the Tribunal - serve as a bold italicised underlining of the legal jeopardy which arises from showing prejudice towards people with gender critical beliefs.  Employers – and others – who have taken a position on this debate need urgently to review the basis on which that position was reached, and the efficacy of any advice they have received.”